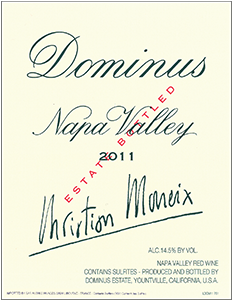 Savory herbs, menthol, smoke and licorice are some of the aromas that open up in the glass in the 2011 Dominus. This is a relatively immediate, expressive Dominus with plenty of near-term appeal. The style is open and succulent for the year, with lovely balance and poise. Crushed rose petals and dried herbs linger in the close. With time in the glass, the 2011 fleshes out nicely. In 2011 Dominus is 86% Cabernet Sauvignon, 9% Petit Verdot and 5% Cabernet Franc.

The 2011 Dominus, which had the misfortunate to follow the virtually perfect 2010, is a blend of 86% Cabernet Sauvignon, 9% Petit Verdot and 5% Cabernet Franc (5,000 cases produced). The late harvest began on October 15 and finished on October 24. This is an elegant Dominus with good opulence, a deep plum/garnet color, and notes of tobacco leaf, forest floor, underbrush, red and blackcurrants, plum sauce and Asian soy. Medium to full-bodied on the attack and mid-palate, it falls off slightly in the mouth (a characteristic of the 2011 vintage). It should be fully mature in another year or two, and last for 10-12 years. It is undoubtedly a success in this challenging vintage.

89
Robert Parker, Wine Advocate (215), October 2014
Please note that these tasting notes/scores are not intended to be exhaustive and in some cases they may not be the most recently published figures. However, we always do our best to add latest scores and reviews when these come to our attention. We advise customers who wish to purchase wines based simply on critical reviews to carry out further research into the latest reports.
Follow Us