The Second wine of Chateau Lafite. Thanks to the fact that the label design is very similar to that of Lafite itself, demand for Carruades from China is enormous and prices tend to be very high. In 2018 this is 56.5% Cabernet Sauvignon and contains all of Lafite's Cabernet Franc (5.5%) and most of the Merlot (38%). 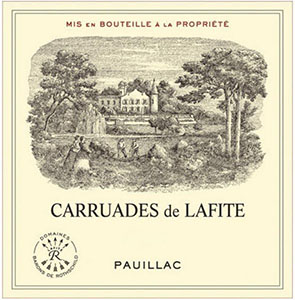 This is a beautiful Carraudes with currant, sweet-tobacco and wet-earth aromas and flavors. Medium-bodied with a dense center-palate and tight, polished tannins. Fresh, with tension. Reminds me of the 1995 Lafite. This is so Lafite in character. It shows so much cabernet sauvignon character. It’s 68% cabernet sauvignon, 27% merlot and the rest cabernet franc. Try after 2026.

The 2019 Carruades de Lafite is rich and expansive, bursting with aromas of ripe berries, violets, spice box, cedar and cassis. Medium to full-bodied, ample and fleshy, it's broad and generous, with a more exotic, extravagant profile than the grand vin but also levels of concentration and character that exceed what was the case a decade ago. In recent years, Lafite has actually ripped up parcels that routinely never made it into the grand vin—and the grand vin now includes more and more Cabernet Sauvignon. Even if Carruades now contains less Merlot than was historically the case (27% in 2019), I suspect it's benefiting from the inclusion of Merlot that would have formerly made it into the assemblage of Lafite itself. -drink 2025-2045

Today, Château Lafite Rothschild amounts to some 110 hectares planted to some 900,000 vines (including 4.5 hectares of Cabernet Sauvignon in Saint-Estèphe). If that figure strikes readers as smaller than it used to be, that's because Lafite has ripped up some less optimally situated plots that never tended to produce wine fit for inclusion in the grand vin. As of 2021, what's more, organic conversion is underway (15 hectares are already farmed biodynamically), and hedges and flowering borders, planted with native species, now begin to break up the monoculture of the vine. Cover crops, too, have been added to the viticultural team's agronomic arsenal and are delivering good results in parcels with more humid or clay-rich soils. In the winery, Lafite is meticulously traditional: the grapes are sorted twice, once optically, and see a classical maceration in wooden and cement tanks with pump-overs and some use of the gentle "air pulse" system that disrupts the cap and oxygenates the ferment without the need for a full pump-over. Malolactic fermentation, as ever, is in tank, and the wine matures in barrels that are mostly produced in-house, with a light toast and favoring the forests of Allier and Nevers. Each vintage is racked three times, traditionally, with one egg white fining (which requires up to 8,000 eggs). As is the case almost everywhere in the Médoc, the tendency is for less and less Merlot in the assemblage. Eric Kohler describes 2019 as the ideal growing season, which saw a hydric deficit at just the right moment to precipitate ripening; and the result is a wine of irreproachable classicism and elegance. Whether the 2010, 2016 or 2019 Lafite ultimately emerges as the best of the decade is a question that well-heeled wine lovers will have immense pleasure debating over the decades to come, but it is clear that 2019 is the most sensual and aromatically expressive at an early age. It's one of the wines of the vintage.

The 2019 Carruades de Lafite is a blend of 68% Cabernet Sauvignon, 27% Merlot and 5% Cabernet Franc, harvested from the 19th of September to the 7th of October. Medium to deep garnet-purple in color, it comes skipping out of the glass with bright, fresh notions of wild blueberries, ripe plums and redcurrant jelly plus hints of cinnamon stick, cumin seed, oolong tea and violets with a waft of black olives. Medium-bodied, the palate delivers loads of rich, ripe, spicy flavors with a soft texture of nicely rounded tannins and with the freshness in the background, finishing on a lingering allspice note. In a word: Yum!

One of the more concentrated Carruades, with the highest percentage of Cabernet Sauvignon to date, packed with powerful dark plum and blackcurrant fruits, pencil lead and slate. Knitted down, sculpted tannins, there is austerity even rigidity to the structure, but it has laid on weight and depth over ageing. This is a Carruades with a sense of occasion and will need time in bottle. 38hl/h yield, 28% new oak.

68% Cabernet Sauvignon, 27% Merlot, 5% Cabernet Franc. Barrel sample.
More Cabernet and less Merlot than usual, and it shows. Bright and fresh, even tangy on the palate, with very fine tannins, the fruit breezy and gourmand. Touch of mint to the dense, dark fruit. Super length. Lots of charm. (JL)
Drink 2026 – 2040

The purity of fruit is so enticing here with strawberries, flowers, lavender and currants. Black earth, too. Some stone and cement. It’s full-bodied with firm, fine tannins. It shows so much cabernet sauvignon character. It’s 68% cabernet sauvignon, 27% merlot and the rest cabernet franc.

As with the Duhart, this is very Pauillac, with pencil lead and cedar notes, and the highest amount of Cabernet Sauvignon in Carruades to date. Subdued on the nose, but it opens up with a lovely floral character. It starts off with frank, autumnal fruit on the attack, majoring on brambly plum, with tannins that build up through the palate and do their job of tugging things back, putting on the brakes. A little more straight laced than the 2018, but one that you would be more than happy to own and to share. Has the drinkability that Lafite prides itself on.

93
Jane Anson, Decanter.com, June 2020
Please note that these tasting notes/scores are not intended to be exhaustive and in some cases they may not be the most recently published figures. However, we always do our best to add latest scores and reviews when these come to our attention. We advise customers who wish to purchase wines based simply on critical reviews to carry out further research into the latest reports.
Follow Us