A popular Classed Growth Château from the southern Médoc, situated just below the village of Margaux. Cantemerle always provides reliable quality and value for money. The wines are never heavy or jammy. Good traditional claret that is usually sold at a modest price and with quality on the rise in recent vintages. The vineyard is planted with 67% Cabernet Sauvignon, 24% Merlot, 5% Cabernet Franc and 4% Petit Verdot. 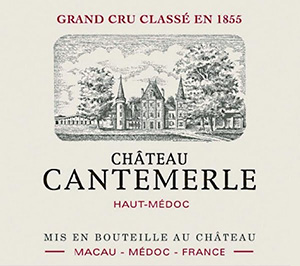 A red with lots of currant, blackberry, fresh-herb and tobacco character. Hint of mushroom, too. It’s full and layered with polished, chewy tannins and a bright and fresh finish. Very long and focused. Give it time to come together. Very classic character here. Best after 2026.

Opening in the glass with notions of rich berry fruit, licorice, cedar, violets and loamy soil, the 2019 Cantemerle is medium to full-bodied, with a fleshy core of fruit, lively acids and powdery tannins that gently assert themselves on the finish. This shut down a little after bottling (some 11 months ago at the time of writing), but it is beginning to bounce back to reveal a wine of real charm and character. - drink 2025-2045

Château Cantemerle saw substantial investments in the 1980s and since then has cruised along very happily—until now, with a new winery and cellar about to enter the construction phase. There are 98 hectares under vine, some 68% of which are planted to Cabernet Sauvignon, at a density of 8,500 vines per hectare. Occupying a crescent around the château, the vineyards sit on Mindel gravels, and the terroir is rather homogenous, such that any given parcel has the potential to make it into the grand vin (the second wine is mostly derived from young-vine parcels). Farming is thoughtful, with minimal chemicals and cover crops employed to limit vigor in parcels planted with Merlot. In the last few years, almost one kilometer of hedges has been added, to enhance biodiversity. The air-pulse system was prototyped here, so that's the order of the day during vinification, and élevage employs moderate percentages of new oak.

The blend in 2019 is very similar to the overall plantings: 68% Cabernet Sauvignon, with 23% Merlot, 5% Cabernet Franc and 4% Petit Verdot. Bright ruby purple colour. Fine and fresh on the nose with light cedar, camphor and cool black fruit. There is an underlying ripeness that gives real intensity and enticement to the nose. The palate is compact and well-measured, driven by fine layers of succulent black and red fruit. The spice is gentle and well integrated together with sandy but ripe tannins. This is classic Claret with added oomph, displaying very fine balance and good length with a light dusting of spice and sweetness. Undoubtedly one of the best Cantemerles we have ever tasted. Very good value for money.

Plenty of smoked cedar oak on the opening beats, this is full-throated in its extraction, but comes across as confident rather than too much, and as it softens the damson and black cherry fruits are attractive. A healthy 55hl/h yield, with 40% new oak

The blend in 2019 is very similar to the overall plantings: 68% Cabernet Sauvignon, with 23% Merlot, 5% Cabernet Franc and 4% Petit Verdot. There is a new pumpover system in use here, called "Airpulse" which is seen as a major change in the winemaking and removes the use of pumps. This should add a layer of refinement to the structure of the wine. The yields are 55hl/ha, and the wine will be aged in 40% new French oak for 12 months. Bright ruby in the glass, the nose is sweet and plummy with just a hint of sandalwood and cedar. The palate is fleshy in fruit but tamed by chalky tannins. This is superbly proportioned and harmonious, offering freshness despite the plump fruit at the core. Vibrant with fruit yet with a savoury edge on the finish.

Crushed berries and walnuts with red-chili and mushroom notes. It’s medium-to full-bodied and soft. Juicy at the end. Ripe tannins and good balance.

Enticing aromatics, clear cassis fruits, astringency on the tannins which bodes well for the ageing as they also have good pliability. Not quite up with their very best vintages but we are getting close here, with tension to the core of the wine, well-judged berry fruit extraction, and clear structure overall. Great Médoc signature. 4% Petit Verdot completes the blend. Drinking Window 2027 - 2042

92
Jane Anson, Decanter.com, June 2020
Please note that these tasting notes/scores are not intended to be exhaustive and in some cases they may not be the most recently published figures. However, we always do our best to add latest scores and reviews when these come to our attention. We advise customers who wish to purchase wines based simply on critical reviews to carry out further research into the latest reports.
Follow Us