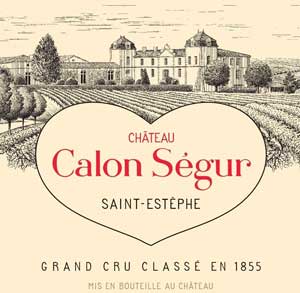 This classic Chateau has one of the greatest terroirs of Bordeaux. Those who tasted the wines made here in the late 1940's and 1950's will know that the potential of Calon is huge. Since the sale of this 55 hectare property to French insurance company Suravenir and, crucially, the arrival of Laurent Dufau as manager, there has been huge investment in - and modernisation of - the wine-making facilities. There's also been much work done in the vineyards. Quality is now right back to top "super-second" levels. The vineyard is planted with 56% Cabernet Sauvignon, 35% Merlot, 7% Cabernet Franc and 2% Petit Verdot. Calon Segur now vies with Montrose and Cos d'Estournel for the title of top Saint Estephe, but retains a more reasonable pricing structure for the outstanding quality it delivers.

The 2019 Calon-Ségur, bottled in July 2021, has an alluring, very floral bouquet, the earlier crushed violet scents seemingly accentuated during the élevage. The palate is pure and poised, the fruit a little darker/blacker than I recall, and quite mineral-driven. There’s lovely acidity and precision here, and a touch of spice toward the harmonious finish. This is a superb wine from Vincent Millet and his team. Drink 2027-2055.

Deep garnet-purple colored, the 2019 Calon Segur gallops out with bold scents of creme de cassis, blackberry preserves, and redcurrant jelly, plus suggestions of violets, menthol, forest floor, and clove oil with perfumed wafts of roses and sandalwood. Full-bodied, the palate is concentrated and impactful with velvety tannins and seamless freshness supporting the multilayered fruit, finishing long and achingly seductive.

Vincent Millet (who can boast a doctorate in wine microbiology and who took up his post as Calon's technical director after a stint at Château Margaux) is doing everything right in terms of restructuring the estate's somewhat neglected vineyards with massal selections, higher density plantings, cover crops and precision viticulture. He's also cleaned up and modernized the winery. The 2019 Calon-Ségur shows the impact of some of those changes already, offering up a rich bouquet of crème de cassis, licorice, warm spices and subtle hints of cigar box, followed by a full-bodied, broad and fleshy palate that's deep and concentrated, with lively acids and beautifully refined tannins. All this is very impressive, but the fly in the ointment is an alcohol level that flirts with 15% and makes itself felt on the warm, liqueured finish. Balance isn't a matter of mere numbers, of course, but despite its admirable qualities and the serious work behind it, I do have reservations about this wine's ultimate equilibrium. Time will tell. The good news is that Millet is actively exploring viticultural strategies to mitigate high alcohol levels. drink 2025-2055

Calon-Ségur is in the midst of a renaissance. A true "Clos," this walled 55-hectare vineyard, the first to be cultivated in Saint-Estèphe, was long planted at a low density of 6,000 vines per hectare. When the cahier des charges (appellation rules) for Saint-Estèphe changed in the recent past, mandating a higher minimum density, the Gasqueton family had already begun replanting at 8,000 vines per hectare. Now estate director Vincent Millet is replanting at 10,000 vines per hectare, and each individual vine has been geo-referenced so that treatments and amendments can be adapted on a vine-by-vine basis within each parcel: the latest in high-tech precision viticulture! The varietal breakdown is changing too, with Cabernet Sauvignon on the increase, currently amounting to around 60% of the estate's holdings and with a target of around 75%. In addition to clones, a massal selection, from parcels near the small chapel just to the east of the château, is underway. Winemaking, too, has been revolutionized: in an entirely new cellar and winery, the grapes are rapidly chilled by passage through a cold tunnel and undergo a three-day cold soak, before a co-innoculated 18- to 21-day maceration with micro-oxygenation. Maturation follows, in new barrels, for 20 months with a traditional racking every three. If all this sounds very detail-oriented, it's because Millet, who boasts a PhD in wine microbiology and spent several years at Château Margaux, is an extremely serious, forward-thinking estate director, and I have no doubt that he is going to unleash all of Calon-Ségur's latent potential. My only reservations, recorded in the accompanying tasting notes, are with the lofty alcohol levels that these 2019s exhibit. But there's no doubting the seriousness of the work going on at this address, or the inevitability of its successful realization.

Sweet cherries and berries with some walnuts and dried flowers, as well as notes of crushed stone, pine, currants and violets. Full-bodied and building gradually on the palate, with intense, polished tannins that are layered throughout the wine, providing well-toned muscle. The finish lasts for minutes. Quintessential Calon. Needs time to soften. Try after 2027.

The 2019 is a blend of 72% Cabernet Sauvignon, 14% Merlot, 12% Cabernet Franc and 1% Petit Verfot. The yield is similar to 2018 with 40hl/ha, and the wine will be aged for 20 months in 100% new French oak. Deep purple in colour, this is one of the most aromatic wines we have tasted, full of clove, damson, rich blackcurrant and pink peppercorn. The palate follows with more exotic clove-like spice, complementing a rich and dense core of black fruit. The tannins are plentiful but it is the depth of fruit that carries the wine and subsumes all else. Extremely complex with both sweet and savoury tones, the acidity brings freshness and lift to leave an almost floral, chalky and unerring finish. A triumph again in 2019.

As to the Grand Vin, the 2019 Château Calon Ségur checks in as 73% Cabernet Sauvignon, 14% Merlot, 12% Cabernet Franc, and the rest Petit Verdot, brought up in new barrels. This full-bodied, spicy, complex, decadent beauty has building, polished tannins, terrific overall balance, and incredible aromatics of spiced red and black currants, lead pencil, cedary herbs, smoked tobacco, and flowery incense. Complex, ripe, and even sexy, it will need just 4-6 years to hit the early stages of its drink window and is going to cruise for 30 years if properly stored. It's another brilliant wine from this estate.

73% Cabernet Sauvignon, 14% Merlot, 12% Cabernet Franc, 1% Petit Verdot. Barrel sample.
Deep, dark and dense with a whiff of liquorice and menthol. Takes off on the palate with real verticality (‘an autoroute’ says winemaker Vincent Millet). Perhaps a hint of chocolate added to the dark fruit. Big tannic frame but enrobed in generous fruit so practically gourmand. Huge persistence. Again, one for the cellar. (JL) 14.5%
Drink 2030 – 2050

A racy, refined red with a solid core of ripe fruit and a long, linear finish. Medium-to full-bodied and subtle, yet structured. Turns salty and spicy with some cloves. Builds on the finish.

95/97+
Lisa Perrotti-Brown MW, Wine Advocate (June 2020 ), June 2020
Please note that these tasting notes/scores are not intended to be exhaustive and in some cases they may not be the most recently published figures. However, we always do our best to add latest scores and reviews when these come to our attention. We advise customers who wish to purchase wines based simply on critical reviews to carry out further research into the latest reports.
Follow Us