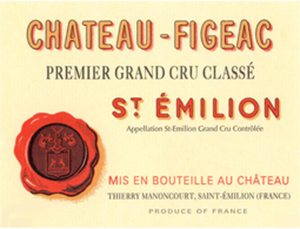 One of the great names and terroirs of Saint Emilion whose wines exude class and sophistication rather than raw power. There has been some serious improvements here recently under winemaker Frédéric Faye. Michel Rolland has been brought in to consult - but not to change the unique Figeac style. Modern techniques such as vibrating sorting tables, de-stemming and an optical laser sorting line are being used, as well as 100% new oak barrels from 7 different coopers. As a consequence, the wines produced now seem a little riper and more polished than before but are still fine, pure and classic. Unusually for the right bank there is only 30% Merlot in the vineyard with 35% Cabernet Franc and - rare on the right bank - 35% Cabernet Sauvignon. Valmy Nicolas from La Conseillante has been brought in to sort out the commercial side. A sizeable part of production is relegated to the second label - Petit Figeac. After two stunning vintages in 2015 and 2016 Figeac is one of the hottest properties in Bordeaux. The 2018 harvest lasted nearly a month from the picking of the first Merlot to the last Cabernet. The blend is 37% Merlot, 30% Cabernet Franc and 33% Cabernet Sauvignon with a yield of 39 hl/ha and 100% new oak. 14 degrees. 10,000 cases with 4500 of Petit Figeac. Frederic compares this wine to his magnificent 2016 but describes it as being "more crystaline and focussed".

The 2018 Figeac continues to not put a toe, let alone a foot, wrong under head winemaker Frédéric Faye. The bottle is closed initially, and in fact it was only the following morning that it began to unfold and reveal its true character. Quintessential Figeac on the nose, it offers blackberry, briar, pencil shavings courtesy of the Cabernet Sauvignon, and touch of terracotta. Beautifully defined, as we have come to expect these days; I might well confuse it for a Pomerol. The palate is medium-bodied and has soaked up the 100% new oak. Lithe tannins render this more approachable than the Figeacs of yesteryear, yet it maintains the same DNA. Elegant and refined, it gently fans out with pure, slightly tertiary black fruit and traces of clove and bay leaf. To quote my conclusion from barrel, it is still "cool, calm and collected" on the finish. Divine. 2024 - 2055

A powerful, structured Figeac, offering loads of blackberry, blueberry, chocolate, walnut and mushroom with some tobacco. It’s full-bodied with layered, chewy tannins that are polished and beautiful. So impressive and solid. Better than the great 2010? Time will tell. Goes on for a long time. Try after 2026.

Reminiscent of the 2016 with its incredible purity and elegance, the 2018 Château Figeac offers a terrific perfume of crème de cassis, redcurrants, dried earth, tobacco, lead pencil, spring flowers, and exotic spice-driven nuances. Playing in the medium to full-bodied end of the spectrum, it's flawlessly balanced, has silky, polished tannins, and a stunning sense of purity. It doesn't have the sexiness of the 2015, but it's very much in the style of the 2018 vintage with its pure, elegant, haut couture-like style. And it doesn't show a hint of its 100% new oak élevage. Give bottles 4-5 years of bottle age and enjoy over the following 20-30 years. It's not the biggest or richest Saint- Emilion, yet the balance, finesse, and elegance are something to behold. I think it's going to check in behind the 2015 (and maybe the 2019) when all is said and done, but it's unquestionably one of the greatest Figeac in the past 20-30 years. The blend is 38% Cabernet Sauvignon, 36% Merlot, and the balance Cabernet Franc, raised all in new oak. Another big “Bravo” to the talented director, Frédéric Faye!

Tasted blind at Southwold 2018. Deep purple colour. The nose is initially quite reticent here - this is a wine that will need time to open up. With air, there are very primary note of blackcurrant, dark plum, pencil shavings and bramble fruits. The palate is all about drive and energy. Lively acidity cuts through ripe black fruit, making this both succulent and vibrant. Intense but highly focused, this builds to a very powerful finish. Structured and stern for now, this is a wine with great potential.

The 2018 Figeac is made from 37% Merlot, 33% Cabernet Sauvignon, and 30% Cabernet Franc. Deep garnet-purple colored, it explodes out of the glass with flamboyant notes of blackcurrant jelly, blueberry compote, and baked blackberries, plus hints of Chinese five spice, dusty soil, dried roses, and cracked black pepper with a hint of wood smoke. Full-bodied, rich, concentrated, and powerful in the mouth, it delivers layers of black fruit preserves with bags of exotic spices and a velvety texture, finishing long and spicy.

Love this vibrant, succulent and welcoming Figeac, great reflection of an excellent vintage in St Emilion. Has plenty of juicy damson and raspberry fuits on the opening beats, with gourmet black pepper and smoked caramel, and velvety tannins that wrap themselves around the fruit and carry it right through the palate. Drawn out finish also, with flecks of lemongrass acidity and slate minerality. Well balanced yet succulent, a little atypical perhaps of Figeac in its upfront charms, but hard to disagree with - and the mint leaf finish brings things back into line. Harvest Sptember 17 to October 12, 100% new oak for ageing.

Inky with purple rim. A little bit spicy on the nose, scented and ripe but not overripe, that touch of nutmeg that I found on the Nénin. Ripe and pure. Very smooth and rich on the palate, remarkably soft when you know the quantity of tannins. Smooth and accessible, rounded and luxurious but balanced by the freshness. Grainy texture but fine grained. Second tasting of a cooler sample (the temporary tasting room was a tent and the samples warmed up quickly when the sun was out): fragrant with small black berries, opens up to a more scented beauty, still some spice but also a hint of roses. Greater finesse and freshness at a cooler temperature. Concentrated but so round on the finish. More Cabernet Sauvignon would have given a hardness on the finish, says Faye. Cool chalky finesse. Fine-grained persistence and freshness with a surprising juiciness on the finish.
Drink 2024-2034

Deep ruby in the glass, with an expansive, expressive nose of creamy cassis, white chocolate, toasted spices and fresher, graphite minerality. The palate is opulent in fruit - fleshy, ripe black cherries and blackcurrant explode on entry - yet has magnificent poise. Fresh acidity and refined, mouthcoating tannins bring fantastic precision and contain the more exuberant, chocolatey, spicy tones through the mid palate. This restraint gives the finish great drive and length, with all elements in perfect harmony between toasty opulence and fresh black fruits. Another hit from Figeac in a fantastic run of vintages.

This is pretty gorgeous, with a velvety texture that lets nearly exotic cassis, plum and blackberry fruit reduction flavors roll through. Has a beautiful bass line of warm earth and smoldering tobacco notes all while keeping its sensational mouthfeel. The encore on the finish makes you realize this is the serious gourmet stuff. One of the highlights of the vintage.

This shows wonderful precision and focus with dark-berry, tobacco, and blueberry character. Full-bodied, tight and vivid. Solid and structured. Really powerful for Figeac. The real new style here of Figeac that harkens back to the great wines of the 1950s and 1940s. This year, equal parts of merlot, cabernet sauvignon and cabernet franc.

The 2018 Figeac is composed of 37% Merlot, 33% Cabernet Sauvignon and 30% Cabernet Franc, harvested September 17 to October 12 with a 3.7 pH and 14% alcohol. Deep purple-black in color, it charges out of the gate with vivacious black and red cherries, cassis, warm plums and wild blueberries scents plus fragrant hints of violets, star anise, tilled soil and forest floor with wafts of Ceylon tea and chocolate box. Full-bodied and jam-packed with energetic, crunchy black and blue fruits, it has a rock-solid, firm, grainy frame and loads of bright, refreshing sparks lifting the dense layers on the very long, savory finish. Wow—the Cabernet really makes itself known this vintage, and it is good. The signature of this wine is so clear, so defined, that this is a Bordeaux wine without peers. In my view, this is the finest Figeac ever produced.

Back to a more traditional blend after last year's frost impact, Figeac has done a wonderful job of harnessing the opulence of the vintage while maintaining freshness. This is extremely focussed and precise, with a silky texture and inky depths, developing complexity as the flavours unfurl. These are big tannins but they steal up on you, doing that subtle creep that's such a marker of the vintage. Powerful, utterly gorgeous and clearly a wine that will age well, this is equal to the estate's excellent 2016.

Tasting like a hypothetical blend of the 2015 and 2016, the 2018 Château Figeac offers that rare mix of elegance and sexiness that makes it the most Médoc-like wine from the Right Bank. Checking in as a blend of 38% Cabernet Sauvignon, 36% Merlot and 26% Cabernet Franc that will spend 19 months in new oak, made from 75% of the total production, it offers a saturated purple color as well as incredible notes of liquid violets, exotic flowers, crème de cassis, and spice box. Full-bodied, multi-dimensional, flawlessly balanced, and with awesome purity of fruit, it’s going to flirt with perfection in 4-5 years and keep for 3-4 decades or more. Hats off to director Frédéric Faye for another viscerally thrilling wine that’s up with the crème de la crème of the vintage.

97/99
Jeb Dunnuck, JebDunnuck.com, May 2019
Please note that these tasting notes/scores are not intended to be exhaustive and in some cases they may not be the most recently published figures. However, we always do our best to add latest scores and reviews when these come to our attention. We advise customers who wish to purchase wines based simply on critical reviews to carry out further research into the latest reports.
Follow Us