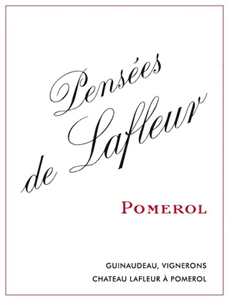 This is the rarely seen second wine of Pomerol's Chateau Lafleur.

View all vintages of this wine | View all wines by Lafleur

The 2017 Pensées de Lafleur has a very harmonious bouquet with black cherries, iodine and light violet aromas that blossoms in the glass. The palate is medium-bodied with fine tannins and quite structured for this particular cuvée. A beguiling, black pepper and pencil lead tinged finish lingers in the mouth. Excellent. Drink 2023-2050.

The 2017 Pensées de Lafleur is a blend of 52% Merlot and 48% Cabernet Franc. Medium to deep garnet-purple colored, it springs from the glass with vivacious scents of exotic spices—cassia, fenugreek, cumin seed and star anise—over a core of black raspberries, wild blueberries and Black Forest cake plus a waft of roses. Medium to full-bodied, the palate is filled with juicy black fruits and loads of spicy sparks, framed by firm, finely grained tannins and a lively backbone, finishing on a lingering iron ore note.

Chateau Lafleur was protected from the 2017 frosts. “Back in 2013 we started thinking about frost,” Lafleur and Family Guinaudeau’s cellar master Omri Ram informed me. “We bought smudge pots in 2014 with Petrus. The afternoon before the 2017 frost, we deployed 1500 smudge pots. At Lafleur, there were no vines that were directly hit. Yields were slightly above average. We think this wine is in the same family as 2015, 2016 and 2018...maybe 2019.”

Unaffected by the frosts, quantities were stable for Lafleur in 2017, and they enjoyed yields similar to their 2015 and 2016 crops. “A tad less wine than in 2015, a tad more wine than in 2016,” Ram commented. “The berry size in 2017 was tiny—like in 2015.” As readers will ascertain from my score, Lafleur is one of the few properties that did not miss a beat in 2017, producing a truly extraordinary effort that is stylistically very different from their 2015 but potentially its equal in terms of quality.

However, circumstances were different at the other Guinaudeau vineyard sites. At Grand Village, there was considerable frost damage. “In the beginning, we estimated 50% of the vines were affected,” said Ram. “We decided not to use these at all. We pruned them right back straight away. But later we saw that some vines we thought were OK were, in fact, affected. They stopped growing or got sluggish. We had to decide, are we happy with these vines? Finally, we thought, no. This was another 35% or more of the vines. In the end, we did not use 80% to 90% of the vines. We have very little Grand Village this year. This year the wine has a much more limestone-intense character.”

“For us the case was very clear from the beginning,” Ram continued. “We are vignerons. Either we have great grapes, or just forget about it. Some things got damaged—using them was not an option.”

Pensées de Lafleur is not a second wine, as it comes from a single, rather oddly shaped, 0.69-hectare block of clay in the middle of the Lafleur vineyard. Composed of 52% Merlot and 48% Cabernet Franc, the 2017 Pensées de Lafleur is medium to deep garnet-purple in color and comes bounding out of the glass with gorgeous crushed black and red cherries notes, yeast extract, lilacs and rose hips with touches of cinnamon stick and tilled soil. The palate is medium-bodied, elegant, very fine and very fresh with a long, mineral-laced finish.

Deep, dark berries with lots of tree bark, black tea and dark chocolate. Medium-to full-body and enveloped by fine, polished tannins that give it form and focus. Try after 2023, yet very approachable even now.

An impressively tight and solid wine from Lafleur with dark-berry, chocolate and spice character as well as some white-pepper and salty undertones. Full-bodied, very tight and focused. A really pretty young 2017.

The 2017 Pensées de Lafleur is simply stunning. Tasting it today, I can only conclude that Pensées is obviously more complete and enthralling than many Grand Vins in this vintage. Explosive, deep and beautifully resonant, the Pensées shows tremendous depth and energy, not to mention so much character. What else can I say, except that I absolutely loved it. Drink 2022-2037

The 2017 Pensées de Lafleur is a very serious wine. Deceptively medium in body, the 2017 packs quite a punch, with tons of depth to the dark cherry, plum, rose petal and lavender flavors. There is so much character and personality here.

Deep crimson. Some violet on the nose and deep and long on the palate. Less charm and more depth than in previous vintages. But opens up to red fruit. Chewy chocolate texture and a delicious hint of spice – nutmeg? – on the mid palate. Caressing depth of tannin texture. Long as well as deep.
Drink 2023-2030

Tasted blind. Deep ruby colour. Powerful nose of ripe dark cherries and dark plums – there are layers of wood spice but they are well integrated. The palate is round and rich, plump and seductive. This is a generous style but not overworked, it retains polish with smoky dark fruit throughout. A complete wine with good posture despite its hedonistic tones.
Drink 2024 – 2038

A bright purple colour in the class, with fresh and vibrant blue and red frutis shining through on the nose. The palate has ripe, silky tannins that offer a gentle framework for the juicy red fruit. The hints of graphite and wood smoke are subtle and offer a nice harmony between the cooler and more exotic elements of this wine. Quintessential Pomerol that should offer great approachability.

The 1,500 candles in the vineyards (as with Petrus and VCC) were effective against the frost here, and as with much of the region the water stress was causing concern until rain at the end of June, which got everything growing again. The dry July and August saw no extreme temperatures, certainly more moderate than 2015, and the picking took place over two periods, with the Merlot on 16 September and the Cabernet Franc on 29 September. Those bouncy tannins are really defined, and this is a fairly serious take on Les Pensées de Lafleur, with accentuated power and tension that comes from its 0.69ha of clay soils (compared to the gravels elsewhere in the 4.58ha vineyard). Good persistency, and lovely floral edging.
Drinking Window 2025 - 2038

Chewy and quite plump, this is a red-fruited Pensées and it seems rather relaxed already. Not a long-lived wine, there is decent juiciness and the oak is nicely balanced and it will provide rather exciting drinking in the short to medium term.

16.5
Matthew Jukes, Matthew Jukes' Blog, April 2018
Please note that these tasting notes/scores are not intended to be exhaustive and in some cases they may not be the most recently published figures. However, we always do our best to add latest scores and reviews when these come to our attention. We advise customers who wish to purchase wines based simply on critical reviews to carry out further research into the latest reports.
Follow Us