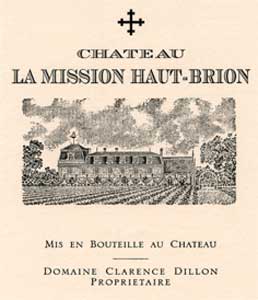 A monumental wine, this historic La Mission-Haut-Brion was the last vintage made by the descendants of the Woltner family, who had owned this estate for decades prior to selling it to their neighbors, the Dillon family (the American owners of cross-street rival, Chateau Haut-Brion). The 1982 admirably demonstrates the magnificence of La Mission as well as the singularity of this amazing terroir. I had the good fortune of tasting it from barrel (where it was an enormous Graves fruit bomb) and watching it develop more nuances in bottle. At age 30, it remains a majestic, multidimensional, profound Bordeaux with another 20-30+ years of life ahead of it. It's no secret that the great vintages of Bordeaux have levels of fruit extract and depth that go beyond other years. It is this fruit, often referred to as "fat" or "concentration," that takes decades to dissipate and fade. As it does so, the extraordinary aromatic expression of the terroir asserts itself. Remarkably, the 1982 is still in late adolescence and has not yet reached its peak. Early in my career, much of my reputation was established on calling this vintage correctly, but I never in my wildest dreams thought the 1982s would mature as slowly and last as long as some seem capable of doing. One of the handful of perfect wines of the vintage, the La Mission still possesses a remarkably dense ruby/purple color with only a slight garnet and lightening at the edge. The fruit-dominated aromatics reveal lots of cassis, blueberry, scorched earth, black truffle, incense, graphite and high-class, unsmoked cigar tobacco-like notes. Still exhibiting remarkable concentration, enormous body, silky sweet tannin, and no perceptible acidity, the 1982 remains fresh, delineated and super-compelling. A massive La Mission made by the Dewravin family and their winemakers, all of whom were dismissed the following year when the estate was acquired by Haut-Brion, this modern day legend shows no signs of decline. In fact, it may not have yet reached its peak. Anticipated maturity: now-2060+.

One of the great wines of the vintage, and the last produced under the ownership of the Woltner family, the 1982 La Mission Haut-Brion remains remarkably youthful, exhibiting a saturated ruby-black hue. Unfurling in the glass with rich aromas of black fruits, cigar smoke, loamy soil, black truffle, peat and pencil shavings, it's full-bodied, broad and concentrated, with a deep core of fruit, ripe tannins and a long, expansive finish. Over the last decade, the wine has become increasingly seamless and elegant, without losing any of its vitality, and it is now clear, if it were ever in doubt, that this wine can stand alongside vintages such as 1961 and 1955 as one of the great La Mission Haut-Brions of the 20th century. Readers should note that the La Tour Haut-Brion of the same vintage performs at a very similar level of quality.

Lovely wine, so long as you don't have it alongside the beefier, though arguably less sophisticated, 1989. Very dark with a rust-coloured rim. Rich, ripe, very sumptuous nose with impressive freshness on the palate. Lively, long and complete, Leafily aromatic but not at all herbaceous. Transparent. More acidity than the 1989 but not too much.Drink 2000-2025.Date tasted 23rd June 08.

The greatest La Mission Haut Brion made between the 1975 and 1989, the 1982 is, stylistically, a dead-ringer for the ethereal 1959. One of the most massive wines of the vintage, it remains an adolescent in terms of evolution, but it can be drunk with great pleasure if it is decanted 2-3 hours in advance. A thick, unctuously-textured wine with massive richness as well as abundant notes of black fruits, truffles, creosote, scorched earth, smoke, and camphor, a colossal mouthfeel, a layered texture, incredible depth of fruit and glycerin, and copious, but well-integrated tannins that are largely concealed by the incredible amount of fruit. An old school La Mission, it is a tour de force that should continue to age effortlessly for another 40+ years. A monumental wine!

An extraordinary effort that gets better with each tasting, this dark, murky, garnet/purple-colored 1982 exhibits a fabulously complex nose of hot bricks, asphalt, black fruits, tar, roast beef, and truffles, colossal concentration, super-ripeness, an unctuous texture, and low acidity. While still exceptionally youthful, this wine is powerful, dense, large-scaled, and intense. It is evolving at a snail's pace, but should continue to improve for another 10-15 years, and last for another three decades. A candidate for perfection!

99+
Robert Parker, Wine Advocate (129), June 2000
95
Robert Parker, Bordeaux Book (1), September 1986
Please note that these tasting notes/scores are not intended to be exhaustive and in some cases they may not be the most recently published figures. However, we always do our best to add latest scores and reviews when these come to our attention. We advise customers who wish to purchase wines based simply on critical reviews to carry out further research into the latest reports.
Follow Us