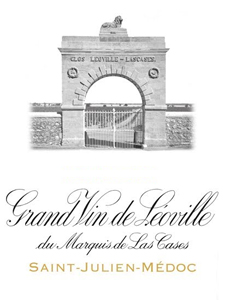 The late Michael Delon always thought that this was the greatest vintage he had produced. We often tasted it side by side with the 1982, because I always preferred the latter vintage. Of course, the two vintages are quite different in style: the 1986 is a monument to classicism with great tannin, extraordinary delineation and a huge full-bodied nose of sweet, ripe cassis fruit intermixed with vanilla, melon, fruitcake and a multitude of spices. The wine has always been phenomenally concentrated yet wonderfully fresh and vigorous. The wine still seems young yet it is hard to believe it is not close to full maturity. It is a great example of Leoville Lascases and another compelling reason to take a serious look at the top Cabernet Sauvignon-based Médocs of 1986. Anticipated maturity: 2005-2035, Last tasted 9/02

The 1986 Leoville-Las Cases is still so youthful in appearance after 30 years, with only a thin bricking on the rim giving away its age. The bouquet is magnificent: extraordinarily pure and delineated, bewitching black fruit laced with cedar and graphite, the latter lending an almost Pauillac-like personality. The palate is exactly as I have found the previous dozen or so bottles I have tasted: structured, delineated, intense, aristocratic and imperious. It is less formidable than say, ten years ago, so it has probably just stepped onto its drinking plateau. The acidity is perfectly judged lending freshness and tension, crucial to counterbalance those layers of spicy black fruit that fans out with cedar and graphite (again) towards the finish. You come away with the feeling of having consumed a wine with immense energy, yet with so much more to give over the next three decades, and knowing this property, perhaps even the three decades after that! I would agree with the late Michel Delon: the 1986 Léoville Las-Cases is the summit of the 1980s. Drink 2016-2060.

The 1986 Leoville-Las Cases, which Delon continues to believe is his finest vintage in the eighties (even eclipsing the 1982), still exhibits a black/purple color with no signs of age. The nose offers up aromas of exceptionally ripe cassis fruit intertwined with scents of vanillin, minerals, and spices. The wine is full-bodied, exceptionally well-delineated, and phenomenally concentrated. Still unevolved and youthful, this is one of the most profound Leoville-Las-Cases, but for my palate, it remains a notch behind both the 1982 and 1996. Anticipated maturity: 2003-2030. Last tasted 3/97

This has always been one of my favourite wines from the estate, Michel Delon's favourite - but it continues to be a beast of a wine. Deep, almost opaque in colour, it has a powerful bouquet of blackberry, graphite, sous-bois and cigar box that takes its time to open. The palate has solid, rigid tannins that support its saturnine black fruit. There is incredible volume and dimension to this wine although compared to recent bottles it appears to be softening just a little on the finish. Yet it will never lose its masculine nature and is not a Bordeaux for those seeking lush, comforting fruit. Tasted November 2012.

A very sweet ripe nose of black berries, smoke, tobacco, blood orange and raspberry leaf. Great definition and poise although it is more open than the bottle bought over from the chateau in September. The palate is full-bodied with fine, grainy tannins, immense structure with acidity to cut through those dense, black fruits. Very good grip, conservative compared to the '85 but with greater complexity than the '82 on the finish. Tannic and sinewy, so much concentration that it does not know what to do with it all, yet very sweet on the aftertaste. Needs a lot of time, decades. Drink 2015-2040+. Tasted December 2007.

98
Neal Martin, RobertParker.com, March 2008
Please note that these tasting notes/scores are not intended to be exhaustive and in some cases they may not be the most recently published figures. However, we always do our best to add latest scores and reviews when these come to our attention. We advise customers who wish to purchase wines based simply on critical reviews to carry out further research into the latest reports.
Follow Us