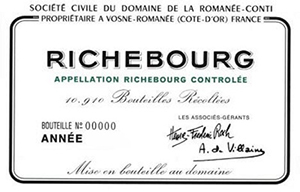 A much more restrained, even taciturn nose that is actually quite ripe, spicy, fresh and diaphanous features primarily floral infused red berry, mineral and Asian spice aromas that merge gracefully into supple, round and tautly muscled broad-shouldered flavors that are almost as pure as those of the RSV, all wrapped in a detailed, focused and almost painfully intense finish brimming with minerality and striking length. This is a karate champion of a wine that isn't especially big but the power and authority of the punch is hard to believe. I suspect that despite the fact that the '07 Riche will not be a long distance runner by the standards that are typical here, this will be a late bloomer in terms of permitting a true assessment of its character and potential, meaning at least a decade.

93
Allen Meadows, Burghound.com (37), January 2010
Please note that these tasting notes/scores are not intended to be exhaustive and in some cases they may not be the most recently published figures. However, we always do our best to add latest scores and reviews when these come to our attention. We advise customers who wish to purchase wines based simply on critical reviews to carry out further research into the latest reports.
Follow Us