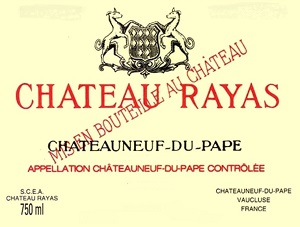 I think the Rayas 2007 Chateauneuf du Pape will turn out to eclipse the 2005. It is unequivocally the finest wine made here since Emmanuel Reynaud's uncle, the late Jacques Reynaud, produced his brilliant 1995. This wine was just released this year, with the 2008 coming on the market in the next few months. The 2007 is a relatively dark ruby/purple-tinged wine, more intensely colored than most Rayas Chateauneufs tend to be, since they are made from 100% Grenache and color has never been one of their hallmarks. The extraordinarily youthful and still burgeoning aromatics of black raspberries, black cherries, truffles and licorice lead to a full-bodied, powerful Rayas with sweet tannin, adequate acidity, and an ethereal richness and unctuosity that delicately offers a sensual texture. It is full-bodied, concentrated and approachable, but won't hit its peak for at least another 4-5 years and will last for 25 or more. This is a spectacular Rayas, the likes of which hasn't existed at this qualitative level since 1995.

I had previously written that I thought the 2005 was the greatest Rayas Chateauneuf du Pape made after 1995, but I think the 2007 may eclipse it. Perhaps it is a stylistic thing as the 2005 is a sturdier, more masculine style, and the 2007 is an opulent, voluptuous wine that is more reminiscent of the 1990, while the 2005 is similar to the 1995. The 2007 possesses a dark ruby color, silky tannins, sweet fruit, and enormous quantities of kirsch, licorice, black raspberries, and incense notes. Even though I tasted it shortly after bottling, it was exceptionally dense and pure. Anticipated maturity: 2012-2032+.

The three component parts of the 2007 Rayas Chateauneuf du Pape were rated between (92-95) and (95-99), so I suspect it will merit a score in the upper nineties after bottling. It possesses a moderately deep ruby color (Rayas is never one of the darker-colored Chateauneuf du Papes) as well as a fabulously sweet nose of black cherry liqueur, black raspberries, licorice, and spice. The purity, exoticism, supple, silky tannins, and layered, full-bodied mouthfeel suggest this will be a great Rayas, much in the style of the 1985 or 1981. This stunner should drink effortlessly for 25-30 years. By the way, just so readers understand I am not alone in thinking so highly of the 2007s in this cellar, Emmanuel Reynaud said that in 28 years of winemaking, the most perfect grapes he has ever harvested from Fonsalette and Rayas occurred in 2007!

93/97+
Robert Parker, RobertParker.com, October 2008
Please note that these tasting notes/scores are not intended to be exhaustive and in some cases they may not be the most recently published figures. However, we always do our best to add latest scores and reviews when these come to our attention. We advise customers who wish to purchase wines based simply on critical reviews to carry out further research into the latest reports.
Follow Us