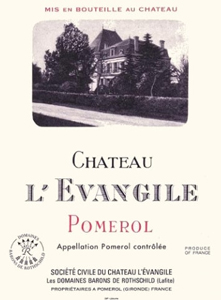 This is an absolutely spectacular L'Evangile. It remains to be seen whether 2009 will eclipse this great effort. Largely a Merlot-dominated blend with some Cabernet Franc in it, the greatness of this terroir is exhibited in the complexity of the nose, which offers up hints of subtle chocolate, blueberry, blackberry, truffle, barbecue smoke, and graphite. Dense, rich, and full-bodied, with an opulence and succulence that are prodigious, the tannins are present but extremely sweet, and the wine multi-dimensional and just emerging as a compellingly complex, head-turning beauty. Drink it now and over the next 20-25 years. Kudos to L'Evangile. Drink 2010-2035.

This fabulous L'Evangile rivals such recent great vintages as 1998, 1995, 1990, and of course, 1982. With aeration, the thick, unctuous, saturated purple color is followed by scents of blueberries, blackberries, truffles, acacia flowers, tar, and graphite. Full-bodied, with tremendous opulence, intensity, and purity as well as silky tannin and a long, powerful, concentrated finish, with a hint of cocoa/chocolate, I initially thought this was a modern-day clone of the 1975, but now I am not so sure. The 2000 is a prodigious, intense, powerful offering, but the tannins are clearly sweeter than those of the controversial 1975. I kept a bottle of this wine open for 11 days, re-corking each evening after pouring an ounce or two for evaluation. The wine simply refused to oxidize, hitting its stride on day 3, and then beginning to drop some fruit by day 8. Anticipated maturity: 2008-2030+.