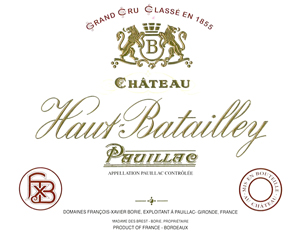 Historically a part of Batailley until the property was split in two in the 1940's. Until recently this Chateau was owned by the Aunt of Grand Puy Lacoste proprietor Xavier Borie who made the wine. The 40 hectare property has 22 hectares of vines (average age 35 years) and these are planted with 70% Cabernet Sauvignon, 25% Merlot and 5% Cabernet Franc. The vines border those of Lynch Bages, Les Forts de Latour and Pichon Lalande. The property was sold to the Cazes family of neighbouring Lynch Bages in March 2017 who have announced that “This acquisition will strengthen our presence in Pauillac with the aim of undertaking a project distinct from Lynch-Bages. In order to respect the estate’s identity and the integrity of its vineyard, the property will be managed independently and have its own dedicated team of technical experts.” 2017 was the first vintage under Cazes ownership and was sold en primeur. The 2016, made by Xavier Borie but bottled by the Cazes, has yet to be released. The new second label of Haut Batailley will be called "Verso". The 2018 is made from 59% Cabernet Sauvignon and 41% Merlot and will be aged in 60% new oak. There is a separate technical team from Lynch Bages here under the direction of Daniel Llose who was wine-maker at Lynch from 1976.

The 2018 Haut-Batailley has a sweet, opulent bouquet of macerated black cherries, blueberry, hints of fresh fig and pressed violets. The palate is quite full-bodied, exerting a gentle grip on the entry, and the layers of black fruit are framed by supple tannins. The acidity is nicely judged here (pH 3.61), and it fans out nicely toward the finish. This is an outgoing Haut-Batailley, a sophomore vintage that wants to make an impression, and a step up from the 2017, even if I think the Cazes family will make better in the future. Drink 2023-2050.

Blended of 59% Cabernet Sauvignon and 41% Merlot aging in 60% new barriques, the 2018 Haut Batailley is very deep purple-black in color and takes some coaxing to reveal profound notes of dark chocolate, crème de cassis, blueberry pie and anise with waves of raspberry pie, lavender and Indian spices. Full, very tightly would and jam-packed with layers of crunchy black and blue fruits, it has a firm line of ripe, grainy tannins and compelling freshness, finishing long with a mineral hint coming through.

I can’t remember a Haut-Batailley this tannic, yet the tannins are savory and very ripe with beauty and purity. Full-bodied, chewy tannins and a long and intense finish.

The 2018 Haut-Batailley is a powerful, virile Pauillac. Black cherry, lavender, spice, menthol, licorice and chocolate are pushed forward, with tons of Cabernet Sauvignon character in both the wine's flavor and structural profile. This is a decidedly unctuous, powerful style, and the elements still need time to fully come together, especially the oak. The blend is 59% Cabernet Sauvignon and 41% Merlot.

59% Cabernet Sauvignon, 41% Merlot. Barrel sample.
Dark and pure on the nose just a touch stony/smoky to add finesse to the fruit. Oak is quite evident on the palate but there's fruit to fill it out. Less aromatic than the second wine (new name: Verso) but there's still a restraint and subtlety in a powerful vintage. Long on the finish yet the persistence is gentle. Fine-grained tannin texture. (JH) 14.3%
Drink 2026-2038

Deep in colour, with a sweet, succulent nose of cassis and baked vanilla. The palate is fleshy and rich, with polished, fine tannins framing a concentrated core of black fruit. The toasty oak is savoury and judiciously used, complementing the pure fruit at the core. The structure builds through the mid-palate, adding a savoury quality that is classic Pauillac. The finish is long, precise and refined. This is another step up from the 2017 as we continue to see the changes behind the scenes lead to tangible improvements in the glass.

The grand vin 2018 Château Haut-Batailley is a beauty and is comprised of 59% Cabernet Sauvignon and 41% Merlot brought up in 60% new French oak. It's an attractive, elegantly styled wine that has lots of juicy Merlot notes of black cherries, graphite, scorched earth, and spice. Rich, medium to full-bodied, beautifully balanced, and with terrific purity on the palate, this brilliant Pauillac is going to be approachable in just a few years and will evolve gracefully. This wine hit 14.3% alcohol with 3.61 pH and an IPT of 81. My money is on it being one of the best to date from this estate.

This is a lovely wine from the second vintage under Lynch Bages’ ownership, full of power and poise and controlled precision. It has a slightly unusual blend owing to a greater proportion of Merlot than has been used in previous vintages, but it doesn't suffer in terms of concentration due to the thick skins and structure of the Merlots in 2018, and what you get instead is a creamy, velvety texture through the mid palate.

It has lots of tannins but they have the enrobed quality that comes from the higher than usual alcohols, and are extremely seductive. It’s more lightly framed than the Lynch Bages, as it was in 2017, and is enjoyable. 3.61pH. 81IPT.

93
Jane Anson, Decanter.com, April 2019
Please note that these tasting notes/scores are not intended to be exhaustive and in some cases they may not be the most recently published figures. However, we always do our best to add latest scores and reviews when these come to our attention. We advise customers who wish to purchase wines based simply on critical reviews to carry out further research into the latest reports.
Follow Us