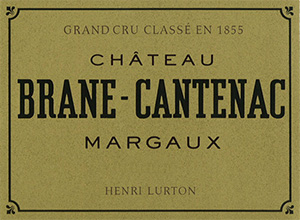 Tasted at the Brane-Cantenac vertical at the château, the 1995 Brane-Cantenac is a blend of 48% Cabernet Sauvignon, 40% Merlot and 12% Cabernet Franc. It has retained that lovely bouquet of raspberry coulis, strawberry, leather and a touch of iodine - clearly the best aromatics of the nineties. The palate is medium-bodied with fine-grain tannin, though not as grippy as previous bottles, the tannins having melted in recent years. There is something almost Asian about the finish - hints of hoisin lining the finish plus a tingle of Shezhuan pepper on the aftertaste. Probably at its peak, I would aver that this was Henri Lurton's first bonafide success at Brane-Cantenac after taking over at the beginning of the decade. Tasted March 2016.

93
Neal Martin, Wine Advocate (228), December 2016
Please note that these tasting notes/scores are not intended to be exhaustive and in some cases they may not be the most recently published figures. However, we always do our best to add latest scores and reviews when these come to our attention. We advise customers who wish to purchase wines based simply on critical reviews to carry out further research into the latest reports.
Follow Us