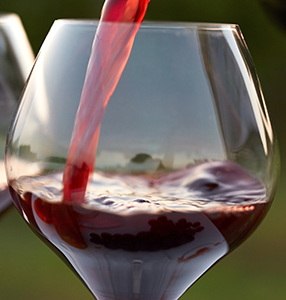 A more deeply pitched and very cool nose offers up very ripe dark berry fruit, truffles, spice hints and a touch of the sauvage, the latter of which can also be found on the rich, full and sweet medium weight plus flavors that deliver fine punch and precision on the delineated and exceptionally pure mineral infused finish. While always a fine wine in the Rousseau stable, 2005 is one of the best vintages that I have seen and it will age well.

The 2005 Ruchottes Chambertin Clos des Ruchottes, from vines averaging fifty years of age in a Rousseau monopole that makes up nearly one third of this entire appellation, offers ripe, fresh black cherry, sweet spices, black tea, high-toned herbal distillates, musky florality, cedar, game, smoked meat and wood smoke on the nose, and a palate of impressive density that revels in fresh fruit juiciness even as it reveals layers of meat and minerals and leaves you salivating and chewing the air long after it has (reluctantly) been spat. This fascinating wine deserves another showing in ten or a dozen years, but should certainly be worthy of more than two decades bottle maturation, indeed I am sure Charles Rousseau would recommend that you not even peek before then. With Eric Rousseau taking over increasingly from his father Charles, bottling may end up being slightly earlier than in the past, but such routine features as triage exclusively in the vineyards (not the press house), the inclusion of whole clusters and stems, precocious malolactic fermentation (although in 2005 and 2006, at least, Rousseau says he didn’t force this), reliance on older barrels, and an eventual light plaque filtration for all wines remain as before. Given the long-running success of these Pinots in subtly yet insistently conveying the distinct personalities of their sites and standing the test of time, some might well ask “why change the recipe?” while others will wonder whether the wines could be made even better. In any event, nature conspired to hand the new generation a vintage of historic dimensions.

93/95
David Schildknecht, Wine Advocate (170), April 2007
Please note that these tasting notes/scores are not intended to be exhaustive and in some cases they may not be the most recently published figures. However, we always do our best to add latest scores and reviews when these come to our attention. We advise customers who wish to purchase wines based simply on critical reviews to carry out further research into the latest reports.
Follow Us