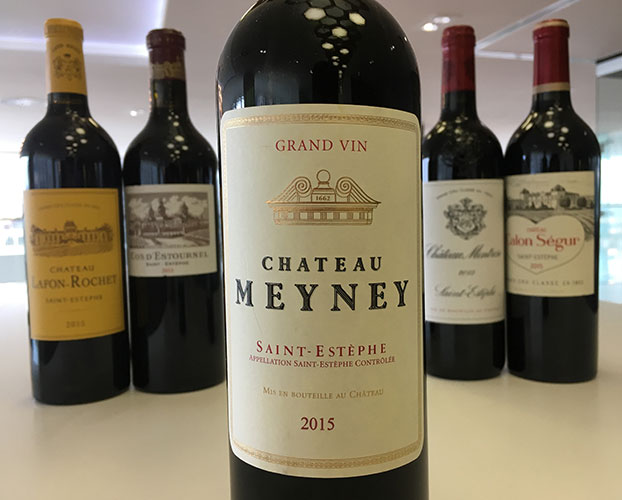 When it comes to blind tasting in the Fine Wine world, there are few more prestigious events than the annual Southwold Tasting. Originally held every January in a sleepy out-of-season seaside town in Suffolk, the event moved to London a few years ago and is attended by the great and the good of the UK wine trade. Such is its comprehensive nature (over 250 of the region’s top wines are tasted blind over 3 days), that it can be seen as the “Champions League” for Bordeaux wine.

Naturally all the superstars are there from the Premier Leagues (First Growths and “Super-Seconds”) but we also taste samples from “the minor leagues” who have a chance to compete against wines that are positioned much higher in the official rankings. We are often asked which modestly priced Médoc Château performs best and, in recent years, there is only one answer – Château Meyney. Not even a “classed growth”, this cru bourgeois is very much a non-league outfit from the Northern division that somehow manages to pull off shock results against Premier League neighbours on a regular basis. And this year it completed a remarkable hat-trick.

Neal Martin has just published a feature on Meyney on Vinous (subscription required). He says that “time and again, Meyney produces a wine that in blind tastings not only performs admirably against more expensive peers but triumphs against all comers”. He writes that the “the fantastic 2014 Meyney eclipses even the 2009 and 2010. This is where everything starts to get serious.” This is an amazing wine and provides stunning value at under £20 per bottle in bond.

The second vintage in our hat-trick is the 2015. Neal writes “2015 Meyney is one of the unheralded gems of the vintage, a rare instance where a Saint-Estèphe is better in this year than in 2014.” In this vintage, Meyney outscored Calon Ségur and Cos d’Estournel and came second to Montrose by a tiny margin

And finally we have the “magnificent” Meyney 2016. In the Southwold tasting in January 2020 it was placed first equal in its commune in a tie with Calon Ségur, out-scoring the already legendary Montrose and Cos d’Estournel.

Here is a great opportunity to buy one (or all) of these vintages. These wines really do represent exceptional value for money.

Minimum Order – 12 bottles
These wines are in stock, immediately available for delivery

“The 2015 Meyney is an outstanding Saint Estèphe and here confirms its shock victory in the blind Southwold tasting. Intense dark cherries, blackberry and sage on the nose reveal just a hint of iron filings, all very cohesive and demonstrating well-integrated oak. The medium-bodied palate offers fine-grained tannins, good grip and plush red fruit laced with white pepper and sage, leading to a more structured finish than the impressive 2014. Superb. Tasted at a vertical at Château Meyney. 2022 - 2045"

“The 2016 Meyney has a very deep color. The bouquet is similar to the bottle poured blind at the Southwold tasting, laden with those mineral-rich black fruits. The palate is focused and poised, framed by very fine tannins and delivering a complex and involving finish that is absolutely top-notch. This gives the big names of the appellation a run for their money. What a fantastic Meyney! A young Saint-Estèphe with a spring in its step. Tasted at a vertical at Château Meyney. 2023 - 2045"

Minimum Order – 12 bottles
These wines are in stock, immediately available for delivery